A Wall of Light Is Dancing in the Roxy Club. Spectoda Has Given It Dynamics and Colours

In the Roxy dance club in Prague, we combined light art with art deco architecture. The wall, which used to glow only red, now plays with colours and animations. It achieved its first success at a concert of a Ukrainian band, when it turned into their national flag.

Art Deco Has Come Back Alive with 21st Century Technology

The Roxy is dominated by art-deco architecture. The artistic elements evoke the atmosphere of a first-republic cinema, where the space lives with modern music and wild dancing.

One of these design pieces is a distinctive light wall, until recently only red. But the club owners wanted to breathe new life into it and use it to its full potential. They needed to install LED strips to light up colourful scenes. At the same time, the animations were not allowed to overshadow the shape of the art-deco elements.

They found the solution in the Spectoda system – combining today's technology with the style of the last century. 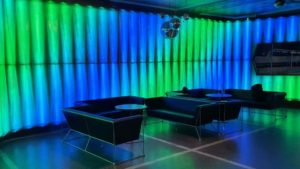 The Narrow Space Forced Us To Improvise

"The main challenge was figuring out how to install the light profiles behind the wall when there was only a narrow gap behind it. Since no one would stretch there, we came up with an alternative. We chose three-metre-long profiles, which we tucked through the top and attached with 3D printed grippers," says Matěj Suchánek, co-founder of Spectoda.

The wall surface is made up of triangular cassettes – the individual profiles illuminate the centre of each cassette, thus accentuating the design.

In total, we used 90 meters of LED strips and 8 Spectoda Controllers. Just like for the Grão café or Bistro & Bar Koule, we created a bespoke app for the Roxy club, from which you can control brightness, colours and effects. The Ukrainian Flag Waved During a Concert

The wall had its premiere on 19 May during a concert of Ukrainian singer Ivan Dorn. His performance, which was part of the #playforUkraine series, gained a special atmosphere when the wall in the background turned into a luminous flag waving in the wind.

"The event was a great success. It was amazing to see how almost everyone who came took photos with the wall," says Anna Veselá, CEO of Spectoda. Check out our other light installations – a chandelier made from a waste hose or a 3D printer farm. Breathe life and colours into your project too. Contact us or stop by Next Zone in Prague and together we'll figure out how to light it up.